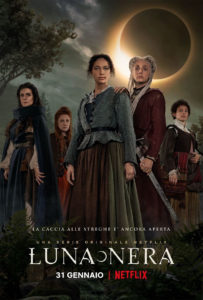 Netflix has always entrusted 20 Red Lights with the organization of their top level Italian based films and TV series marketing shoots.

Set in the 17th century. A teenage midwife named Ade discovers that hers is a family of witches, while Sante, the father of her beloved Pietro, hunts her, accusing her and her grandmother of witchcraft. Ade, as she learns to discover her powers, will form a strong friendship with her fellow witches while keeping in touch with Pietro, who secretly helps her along with her friend Spirto.
In reality the incitement and cause of the persecution of Ade and the coven of witches is Marzio Oreggi, a sorcerer who has been banished from the brotherhood and who aims to take possession of a book which, if in the wrong hands, would evoke an army of dead on Earth bringing the end of the world.

About the photographer Victoria Will

Victoria began her career in the photography industry as a photojournalist and has since transitioned her focus to celebrity portraiture, editorial, and commercial assignments. Victoria’s characteristically authentic portraiture has appeared in the pages of Vogue, New York Times, Rolling Stone, ESPN and W Magazine with commercial campaigns for brands such as Carhartt, Levis, Netflix, Hulu, Epix, AT&T, Bose, Ralph Lauren, and Miller High Life. Her approach is rooted in collaboration and meaningful connection where she seeks intimacy, authenticity, and elegance with a thoughtful eye and composition.

Recognized by numerous honors, including American Photography, PDN Photo Annual, and Communication Arts, her imagery has been the subject of both solo and group exhibitions internationally. Her first monograph, Borne Back, a collection of tintype portraits, was published in 2017 by Peanut Press.

A Washington, D.C. native and graduate of Princeton University, Victoria now splits her time between the West Coast and NYC with her photojournalist husband, their two sons, and French Bulldog Eleanor.