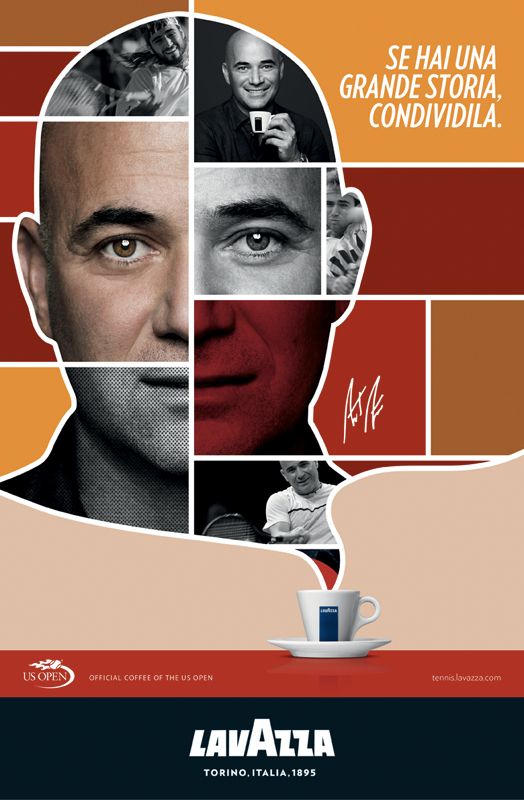 During the US Open tennis championship in New York, Lavazza—the official coffee of the US Open—announced a new global collaboration featuring tennis legend, Andre Agassi. The partnership positions Agassi as Lavazza’s spokesperson for the world of tennis, and officially kicks with an “I’m Back’ campaign at the US Open.

Lavazza and Agassi have joined together to change the lives of underserved youth, starting at the US Open. To create buzz around the “I’m Back” campaign, which encourages “giving back,” Lavazza began with a series of teasers posted on social media. Lavazza then amplified its message in New York City with a series of out-of-home ads strategically placed in key points, featuring a silhouette of Andre Agassi’s iconic 1980s look, complete with a neon pink headband. Consumers at the stadium can enjoy Lavazza coffee at two Lavazza cafés and other points, where the “I’m Back” frappe drink will be available to be served in special edition glasses available for purchase. This coffee drink was developed specifically for the US Open by Lavazza Training Center coffee specialists.

Agassi added, “It has been such a wonderful experience working with the innovative brand from filming the ‘I’m back’ video in Italy, to conceptualizing a fun and engaging activation that is kicking off our partnership. I look forward to seeing what the years ahead have in store for us.” He added, “I am very proud to be partnering with Lavazza, a company that shares not only my passion for tennis, but also an ethical commitment to children and education.”

About the photographer Marco Craig

He has experienced the artistic world since he was very young. At any chance, he would tag along with his father, Mimmo Craig, touring around the world with the Piccolo Teatro di Milano theater company. Thanks to a good friend of his, he was introduced to the prestigious photographic studio run by Aldo Ballo and Mariarosa Toscani. There he met the greatest maestros of design, with whom, in the future, he would carry out important photographic projects.
As the years passed he cooperated with fashion and design magazines as Wallpaper, Vogue Italia, Casa Vogue, Elle Decor, Io Donna, Vanity Fair, Case da Abitare, Brutus and Donna Giappone.
Being attracted to the advertising industry, he soon began to collaborate with the main Italian and international advertising agencies.
Today, as well as signing fashion and design photoshoots, he curates the image of several music industry artists and he shoots catalogues and advertising campaigns for well-known international brands such as S.Pellegrino, Vodafone, Ferrero, L’​Oreal, Kiko, Lavazza, among others.