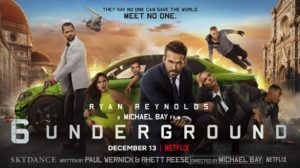 Four years after witnessing the horrors of a brutal regime in the Central Asian nation of Turgistan, an unnamed American billionaire and philanthropist, who made his fortunes from inventing neodymium magnets, fakes his own death to form an anonymous vigilante squad to take down “untouchable” criminals and terrorists. Known as One, he recruits five others to abandon their pasts and join his cause as “ghosts”: Two, a spy; Three, a hitman; Four, a parkour runner and thief; Five, a doctor; and Six, a driver.

About the photographer Michael Müller

Michael Müller is an award-winning celebrity and advertising photographer and director whose work has appeared in countless campaigns and major publications. He is also one of the top key-art photographers in the business, with credits ranging from Sons of Anarchy to all the Iron Man movies, Spider-Man, The Avengers, Spring Breakers, the X-Men movies, and Captain America: Winter Soldier.